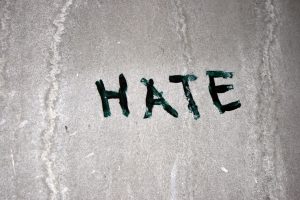 HATE CRIME – DEFINITION: Any unlawful action designed to frighten, harm, injure, intimidate, or harass an individual, in whole or in part, because of a bias motivation against the actual or perceived race, religion, ethnic/national origin, sexual orientation, gender, or disability of the victim.

WHAT YOU CAN DO:

It is the policy of the Cathedral City Police Department to ensure that the rights guaranteed to all, irrespective of their race, religion, ethnic/national origin, sexual orientation, gender, or disability are protected.

Any acts or threats of violence, property damage, harassment, intimidation or other crimes designed to infringe upon those rights will be handled with the utmost priority.

Particular attention shall be given to addressing the safety and related concerns of the victims as well as their families and others affected by the crime.