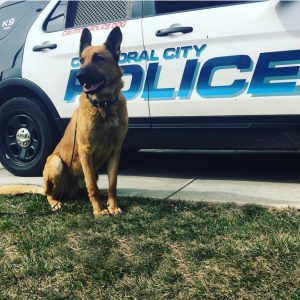 Officer Jeffrey Bird has been a police officer for 12 years. He became a K-9 handler in April 2016 with his new K-9 partner, Robi.

K-9 Robi is a Belgian Malinois who was born in Holland on September 8, 2015. K-9 Robi’s training began as a puppy while still living in Holland and hence, his commands are given in Dutch. K-9 Robi is a dual-purpose K-9 who is trained in the detection of narcotics (Heroin, Methamphetamine, Marijuana and Cocaine) and Patrol work (tracking, area search, suspect apprehension, handler protection). Officer Bird and K-9 Robi are trained by Vohne Liche Kennels located in Banning, CA. 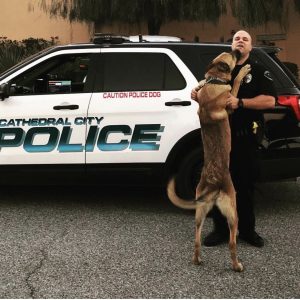 The purpose of utilizing a police K-9 enables police to locate suspects in a more efficient manner. The K-9 can alert on a concealed suspect much more quickly than a human being, giving both the K-9 and the officer time to react. Along with tracking suspects K-9’s are used for detecting narcotics and explosives.  The K-9 can also chase after a running suspect and capture him/her much more quickly than an officer can. The use of K-9s also reduces the amount of injuries received by Officers who might have to physically fight with suspects. Many times a suspect will surrender without a fight just from the presence of a police dog.