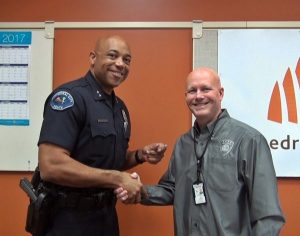 Today is my final day as Chief of Police as I am retiring after a thirty year career in Law Enforcement. In December 2014, I began my duties as your Police Chief in Cathedral City. I must say the time has gone by extremely quick and I have been fortunate to have had the opportunity to work with all of the hard working, dedicated and devoted men and women within all City Departments and your Police Department. I would like to take this opportunity to share with the community the various accomplishments and programs that have been implemented in the Police Department since my arrival.

A Gang Unit was formed which consists of a Sergeant and three Detectives to address gang related crimes and activity occurring in Cathedral City. A Professional Standards Bureau was created with a Sergeant assigned to the duties of handling significant internal affairs investigations, citizen complaints, civil claims filed against the Police Department, policy and procedures updates and internal audits within the organization.

A Traffic Bureau was formed in order to reduce traffic collisions and fatalities which consisted of putting Officers on motorcycles and creating a specialized unit to handle the investigations of major collisions. A Police Chief’s Advisory Council was formed by the me which consisted of 9 members representing the business and residential communities of Cathedral City. The 9 members served as liaisons between the community and the Chief of Police.  Over the years, we met on a bi-monthly basis.

A Police Cadet program was approved by City Council and created for the first time in the Police Department’s history. The Cadet program employs men and women between the ages of 18 and 23 and prepares them for a career in the Criminal Justice field. The goal of the program is to develop these men and women for careers in Cathedral City. The Police Department currently has two Cadets employed.

Cathedral City Police Department created a Homeless Liaison Officer. The position was developed to address the multi-faceted and complex issues facing our community and the growing homelessness situation. Officer Dwayne Hodge was selected to this position and has been collaborating with all stakeholders to improve the quality of life for our residents, businesses and homeless population in Cathedral City.

A body worn camera program was developed and implemented which provides for additional transparency between the community and the Department.

It has been an honor and a privilege to serve as the Chief of Police in this great city since 2014.  Your next Chief of Police will be Travis Walker who has served as your Deputy Police Chief since 2016. He is an honorable and hard-working professional who is more than capable of continuing to lead this Police Department well into the future.

Once again, thank you for this opportunity to serve as your Chief of Police and I hope to see you during a future visit.